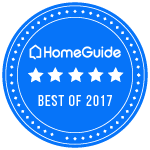 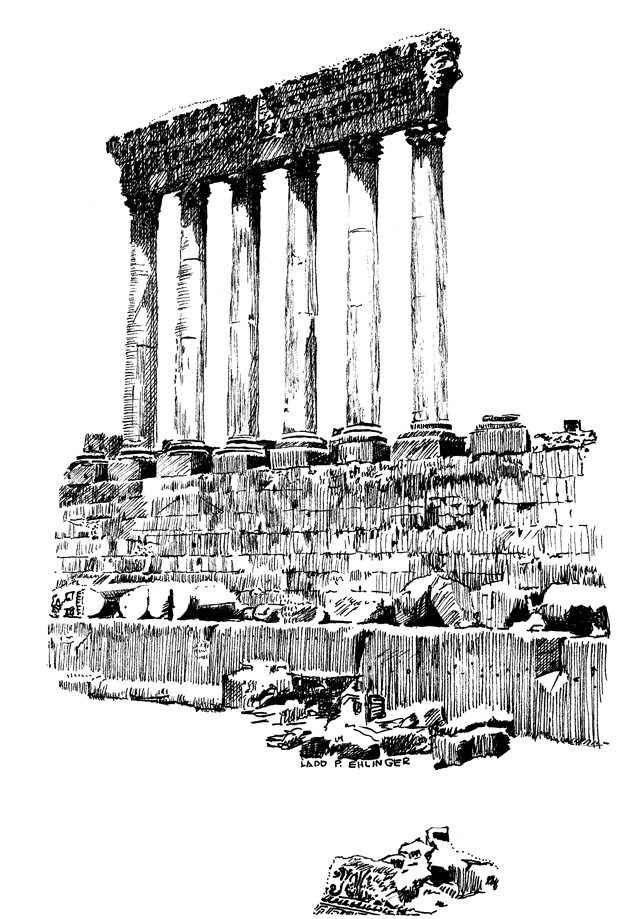 This issue’s signed limited edition print by Ladd Ehlinger is of the only six columns that remain standing on the south side of the Temple of ]upiter, Baalbek, Lebanon. It was actually the house for the worship of Baal.

Baal was the Phoenician Sun-god, a father god ruling the productivity of the sun, lightning, rain, storms, fertility & fecundity, and creativity and as such was the paramount or supreme god. Baal was the primeval god of the Semites, his cult was practiced by both the Hebrews and the Canaanite'Phoenicians in the beginning. Later, the Hebrews were obligated by their prophets to renounce Baal and worship Yahweh. A competition ensued, and Yahweh remained confined to the Hebrew nation. The worship of Baal flourished throughout the remainder of the region, and continued to when the Hellenes took over, and also when the Romans took over, and expanded throughout their respective empires.

The word ‘]upiter’ is derived from the Latin ‘Diupater’, meaning ‘father-god’. It was more of a title than a name to the Romans. The Romans referred to the Hebrew Yahweh as ]upiter, the same for Christ, Amon or Zeus. Baal was distinguished by the Romans from other Jupiter figures by calling him Jupiter Heliopolitanus. It was a clear and straight translation into latin from the Aramaic and Greek when the Romans took over in 64 B.C.

Astarte, consort of Baal, was identified with the earth and its fertility, and added sex to worship in her cult. Under the Hellenic rule she was called Aphrodite, and under the Roman, Venus. The son of Baal and Astarte’ was Adon, Dionysos in Greek, and Bacchus in Roman, the god of wine, women and song. They were worshipped at Baalbek along with Baal. All three were worshipped as nature gods who personified the generative physical powers of nature; the cult of these powers being an inherent part of the primitive religion which fostered the practice of promiscuity, sacred prostitution, and later bachanalian orgies. All this was mixed with the primitive blood sacrifices at the end. The priesthood was crafty and never lost sight of the idea that religion without joy and mysticism was neither religion nor a lucrative business. So they spared no effort in promoting suitable festivals several times a year. Historians at the time wrote: “Feasts and festivals were organized for spectacular sacrifices, mystical prayers, and secret orgies in which the devouts gyrated, twirled and danced in a collective ecstatic frenzy, flagellating themselves happy to suf' fer, and in a spasm of demented mysticism would tear out their sexual organs to offer them to the goddess. These were Phoenician Nights of blood and pleasure around the temple of Astarte.

The biographer of Constantine wrote: “ . . .the cult of Venus has given birth to luxury habits. Men and women clasp together to honor their goddess; husbands and fathers allow their wives and daughters to prostitute themselves publicly to please Astarte’.” The Romans adapted themselves at Baalbek in a fashion of total integration with the culture as they did elsewhere. They rebuilt the city, expanding the temples and the cult, adopting it for themselves. Baalbek is in the lower end of the Bekaa valley, the most fertile valley in the middle east. It served for a while as the breadbasket of Rome.

The Romans brought their own architectural ideas to the task. Temples were built to Venus and to Bacchus as well. Because the valley is relatively flat, the Romans built monumental bases for all of the buildings with huge stones to visually elevate the buildings.

The lower walls of the Temple of Jupiter on the south side (in the print) are composed of 6 stones measuring 33’ long x 14’ high x 10’ deep, weighing 400 tons each. The west wall to the rear has three stones 64’ long x 14’ high x 12’ deep, weighing 800 tons each and were set 20’ above ground level on top of smaller stones! The north wall is similar to the south. These stones are laid with no mortar and joints thinner than a razor blade. These walls are called ‘Cyclopean’ because of the belief that no mere humans could have handled such super-human blocks. Contractors today would have difficulty with these blocks that are larger than any stones handled anywhere else in antiquity.

The total height of the stone base was 45’. The Temple was technically a decastyle peripteral Corinthian temple comprising 54 columns, 19 being on the sides, and 10 on the ends. It measures 310’ in length and 175’ in breadth, a total of 54,250 square feet. It was the largest corinthian style temple ever built.

The columns, a quintessence of imperial Rome, were 65’ high, composed of three stone drums that are 7'6” in diameter at the base, with no fluting. The huge Corinthian capitals were beautifully carved with designs which gracefully reached to the top of the abacus. Although the ratio of total height to lower diameter is 9 1/2 to 1, the columns seem to stand surprisingly high above the plain of the valley. All that remain today are the six in the print, the remainder having been toppled in an earthquake.

The pedestals on which the columns are supported by are more than 6’ in height. The entablature above the columns totals more than 16’ in height, and contains the classical architrave, frieze, and cornice, all three of which are richly, decoratively carved.

In 321 A.D. Constantine made Christianity the official religion. In subsequent years, he forbade the worship of Baal and especially of Venus. Theodosius made it a crime.

In 635 A.D. Baalbek was taken by the Moslems, and in 1171 the Crusaders took it for a while. The Turks took over in 1517, and in l850 lost it to the Sultan of Damascus, who held it until the end of World War I, when it was occupied by the British, then the French with Syria and the rest of Lebanon. The turmoil today resulting from the political instability created by the British and French prevents anyone from safely visiting these magnificent ruins.